Any bona fide French Toastian will tell you that the secret behind good French toast is in the bread. This bread? Well, it isn’t just good. It’s INSANE. 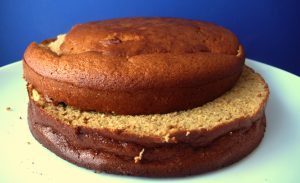 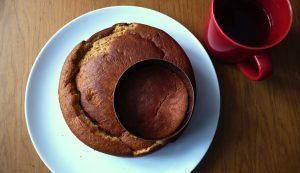 In fact, I dare anyone out there to try this – powder lovers and protein skeptics alike – and not flag it as producing one of the best French Toast in the world => Pure nommage… uffff… OK, before I bust out my ukulele and start composing love songs, here’s the recipe: 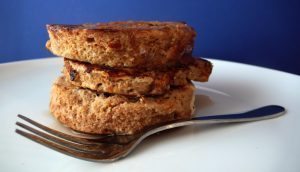 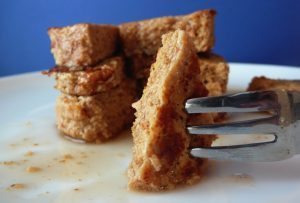 You don’t have to make a cakebread out of the above batter though. You can bake it as a bread loaf and that’d probably work just as well. In fact, baking it as a bread loaf would be better as it yield more (and rectangular) slices… Anyways, I baked it as a cake and cut it horizontally in half. Then, with a cake ring, I got two two-story circles out of the center (see the picture to the right). This yielded four circular slices. 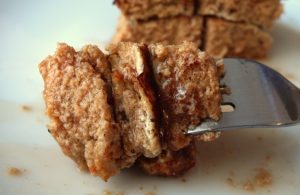 When ready to make the French toast, I whipped one egg with coconut milk and dunked three slices in there (the fourth slice was eaten earlier with just maple syrup – also delicious! but not quite French enough without the egg). I then walked myself to the gym, got home,heated up some coconut oil on a pan and BOOM: fried up three slices.

That’s it: done. I topped the whole thing with sugar-free maple and proceeded to almost have a pleasure-breakdown as I ate it. Seriously, it’s absolutely surreal – magical… it’s insane. See, you get the nuttiness of the millet with the crunchiness of the goji berries in there and the banana and vanillaness coming through each soft and supermoist slice of French Toast. Hey… Zeus. I’ve never eaten a better French Toast in my life and trust me, I’ve eaten a LOT of French Toast in my life!

Any bona fide French Toastian will tell you that the secret behind good French toast is in the bread. This bread? Well, it isn’t just good. It&#...