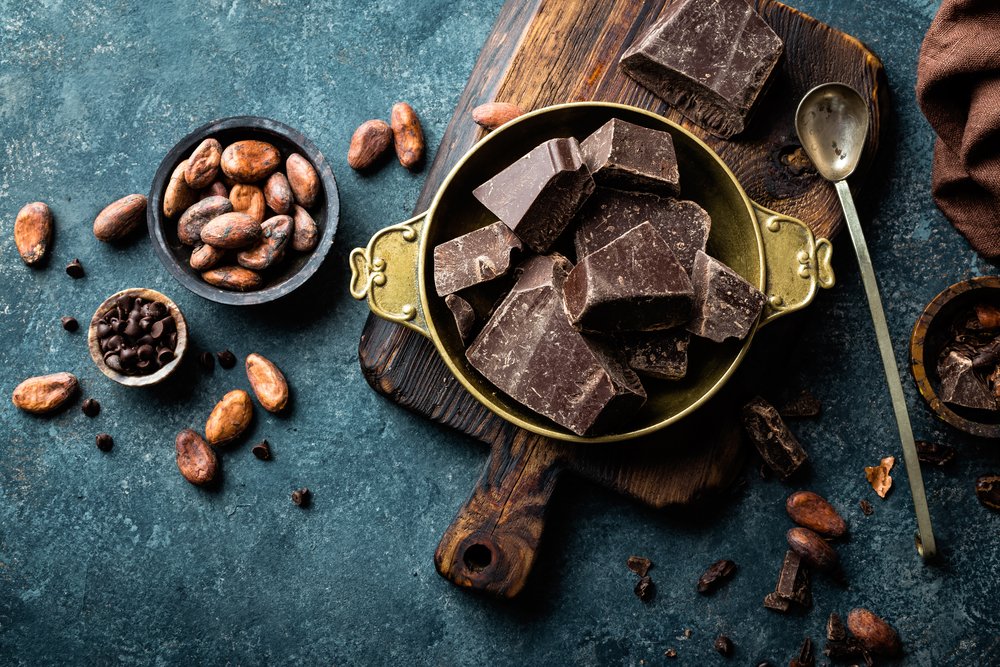 You may be surprised to know that chocolate could actually be considered a superfood; in fact, chocolate is one of the best sources of antioxidants in the world!

Research has shown that good-quality dark chocolate (anything above 70% cocoa solids) can actually improve your health and has some seriously impressive nutritionals!

Here, we explore the top 5 science-supported health benefits of dark chocolate; but first, let’s look at what makes dark chocolate so special…

What Are the Main Differences Between Dark, Milk and White Chocolate?

Where Does Chocolate Come From? 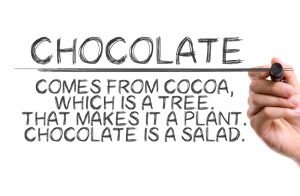 While chocolate (unfortunately) isn’t quite a salad, the chocolate bars we all know and love begin their life in the form of a cacao pod bigger than the size of your hand! Growing from the cocoa tree, the seeds (or beans as we know them) are extracted from the pod, fermented, dried and then roasted. The shells of the beans are then separated from the meat, also known as cacao nibs. You may recognise these little nibs as they are now sold as a stand-alone health-food available in most supermarkets. 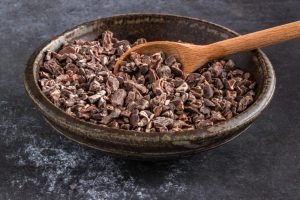 Before we uncover the top 5 proven health benefits of dark chocolate, here’s a handy jargon buster to get to grips with some of the terminology: 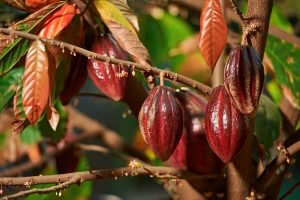 Dark chocolate is bursting with organic, biologically active compounds that function as antioxidants. These include flavanols and polyphenols, amongst others. A particular study found that cocoa and dark chocolate had more antioxidant activity than any other fruits tested. This included well-known ‘superfoods’ acai berries and blueberries! (4). 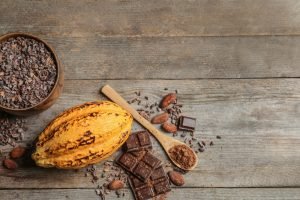 Good quality dark chocolate (with a minimum cocoa content of 70 or above) can actually be very nutritious as it is bursting with minerals, antioxidants and also contains a good amount of soluble fibre.

However, 100 grams is a considerably large amount and not a suggested serving size.  Along with all of the above listed nutrients, 100g also racks up at 600 calories with moderate amounts of sugar. Therefore, dark chocolate is best consumed in moderation.

Dark chocolate also boasts an impressive fatty acid profile, with most of the fats being monounsaturated and saturated, along with small amounts of polyunsaturated fat.

Dark chocolate contains a small amount of caffeine along with other natural stimulants which may help to improve mood and provide a boost of energy. Caffeine is found in cocoa solids but not in cocoa butter, so you can therefore establish the amount of caffeine in chocolate by the cocoa content and darkness. The higher the percentage of cocoa solids in the chocolate, the more caffeine it will contain per gram. 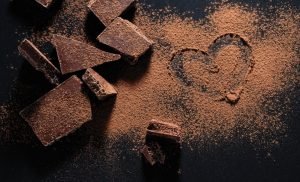 The compounds in dark chocolate have been shown to improve a number of important risk factors for cardiovascular disease and appear to be highly protective. One study in particular found that the compounds in cocoa and dark chocolate significantly reduced oxidised LDL (Low Density Lipoprotein, commonly known as “bad” cholesterol) in men. It also increased HDL (High Density Lipoprotein, AKA “good” cholesterol) and lowered total LDL for those with high cholesterol (1).

Oxidised LDL is a harmful type of cholesterol that is produced in the body when LDL is damaged during chemical reactions with free radicals. When this happens, the LDL particles become reactive, leading to inflammation that’s capable of damaging other tissues in the body, and can lead to disease, organ damage, and increases the risk of heart attack or stroke (12). 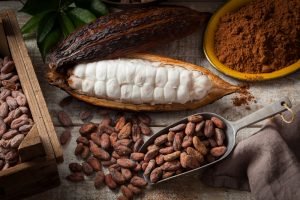 When you consider that cocoa is bursting with an abundance of powerful antioxidants, it makes sense that it can lower oxidised LDL. When the antioxidants present in cocoa enter the bloodstream, they protect the body against oxidative damage (17, 19, 25).

4. May Help to Improve Brain Function: 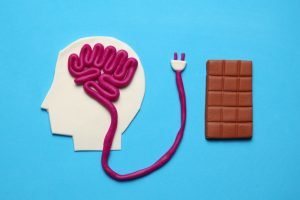 The benefits don’t stop there; Dark chocolate may also improve your brain function and elevate your mood!

There has been extensive research highlighting the positive effects that cocoa and dark chocolate can have on mood, both short term and long term. Some studies have reported evidence of an antidepressant effect and shown that consuming chocolate can help to improve a negative mood and increase ‘feel-good’ hormones such as serotonin (10, 16, 18, 20, 24).

One particular study of healthy volunteers found that eating high-flavanol cocoa for five days improved blood flow to the brain (9).

Additionally, cocoa contains stimulant substances like caffeine and theobromine, which may be a key reason why it can improve brain function in the short term (22). 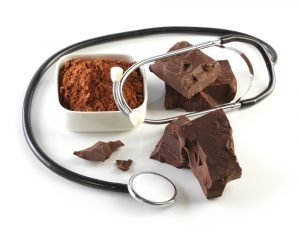 The many flavanols present in dark chocolate can stimulate the endothelium (the lining of all blood vessels, such as arteries and veins), to produce Nitric Oxide (NO)(21).

Nitric Oxide is a compound in the body which sends signals to blood vessels to relax and widen, which lowers the resistance to blood flow and therefore reduces blood pressure. NO also stimulates the release of certain hormones such as human growth hormone and insulin. NO supplements are a category of health supplements you may recognise, the main two being L-citruline and L-arganine, which are both present in many pre-workout products.

Many controlled studies show that cocoa and dark chocolate can improve blood flow and lower blood pressure, although the effects are generally mild (8, 14, 23).

Always opt for high-quality dark chocolate where possible. Anything with a cocoa content of 70% or higher is a safe bet. Dark chocolates generally contains some sugar, but the amounts are usually minimal and the darker the chocolate, the less sugar it will contain. Check the label if you are watching your sugar intake. 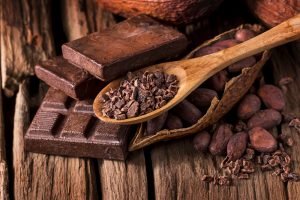 Have a square or two after dinner and try to really savour them, letting it melt in your mouth to enjoy the full flavour and feel satisfied without overdoing it. Mix it up with cocoa-rich nut butters such as our 100% natural and vegan Rawtella and Cacao Almond Butter, packed with the health benefits of both dark chocolate and heart-healthy fats from the nuts – not only nutritious, but incredibly delicious and perfect spread on toast, stirred into porridge or simply added to a shake or smoothie for a boost of antioxidants. They’re both also wonderful baking ingredients and can be used in a whole host of delicious recipes, even savoury… Yes, savoury! Try our mind-blowing chicken mole recipe with a mouth-watering hit of richness coming from the Cacao Almond Butter. Trust us on this one!

If you want to reap the benefits of cocoa minus the calories, try preparing a hot chocolate using cocoa powder, a little vanilla extract and milk or unsweetened plant milk. If you have a sweet tooth, use a small amount of natural sweetener such as agave or stevia, or try our delicious zero calorie, zero sugar syrups for a touch of sweetness without it affecting your macros…or your waistline!

Our Top 3 For Cocoa Benefits: