Have you heard of the paleo diet? It’s all the rage now. Everyone who’s anyone is doing it. If you don’t know what it is, let me describe it in a nutshell: a paleo – or paleolithic – diet is a diet rich in meats, vegetables, fruits and nuts/seeds; it does not feature any dairy, grains, or legumes; it avoids processed foods and basically turns to the question “is this something our cavemen ancestors would eat?” to decide whether a food is suitable for consumption.

There are two kinds of paleo advocates out there: paleo-purists and flexible paleo dieters. Paleo-purists are people who dogmatically follow a paleo diet and categorize anything outside of meat, vegetables, nuts, and fruits as largely noxious to human health. To them, paleo is not a diet – it’s a way of life – and you better follow it if you want to live a long and healthy life. Paleo-purists raise their nose at dairy and all processed foods – including protein powders, which they categorize alongside pretty much all processed foods like artificial sweeteners, refined oils, pre-packaged products, etc.

On the other side of the spectrum, there are people who follow a flexible paleo diet. These are people who look at things more critically and pick and choose what, for them, fits within the confines of their otherwise paleo-friendly diet. These are the people to whom the protein powder I used to make these Protein Truffles (TM) is marketed to. Flexible-paleo dieters will go ahead and use a ‘paleo’ protein powder because it ticks the right boxes of a general paleo approach. Is it dairy-free? Tick. Is it grain-free? Tick.

If you want my opinion on paleo diets in general, I think they’re a step in the right direction. The food they advocate is all wholesome, nutrition-dense – and delicious! The popularity of paleo diets has also been good because it’s helped do away with a lot of misconceptions surrounding specific foods. Bacon, grass-fed butter, and coconut, for example, have gone from being largely vilified to being downright glorified in popular discourse largely thanks to paleo dieters who consume these foods aplenty for the nuutrition and metabolic benefits they pack.

What bugs me about the paleo diet though, is the intransigent and overly dogmatic nature of a lot of the arguments put forward to back it. The romanticized representation of ‘the caveman’ and the simplification of our dietary history bugs me because it’s fundamentally flawed and ignores any and all data that point towards a different (and way more complicated) story – check out the Ted talk I uploaded at the end of this post. I just personally don’t think there’s anything wrong with (well-sourced) dairy or legumes if you’re not sensitive to them. I don’t have a problem with a lot of grains either. I’m actually quite a fan of the gluten-free ones like quinoa, amaranth, rice, and gluten-free oats. And I certainly don’t think there’s anything wrong with most protein powders. It all boils down to education – to knowing how to choose nutritious food, to being able to discern what your body likes from what it doesn’t, to eating what makes you feel and perform best, and to saying no to empty calories – not necessarily always but most of the time. The rest is all a bunch of ideological bla bla bla, in my most humble of opinions. Anyways, back to these Protein Truffles (TM). I made them using a ‘paleo’ protein powder. 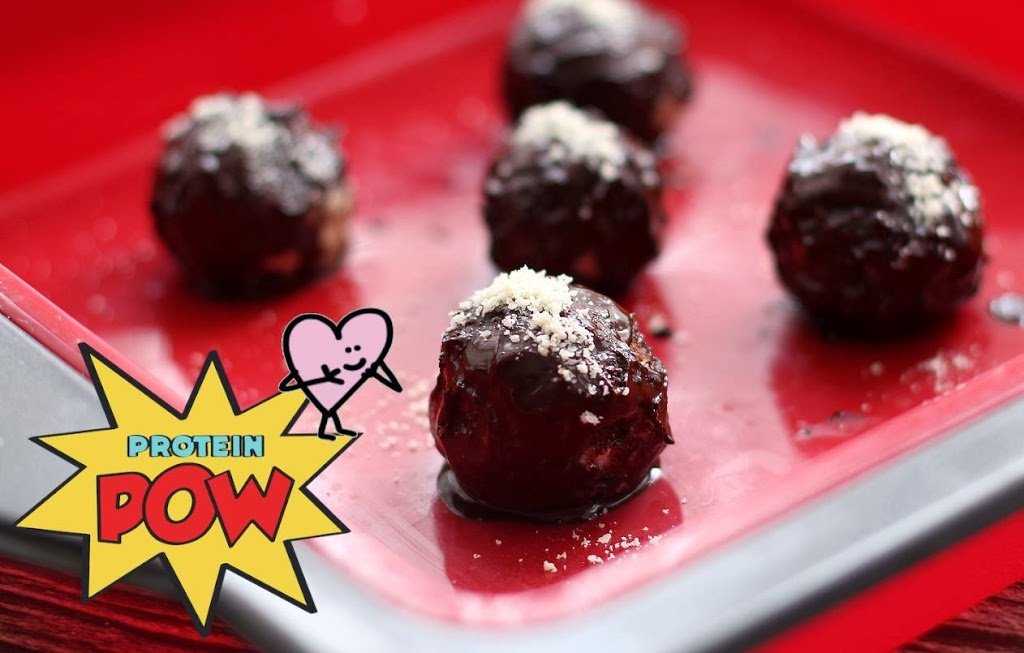 I think it’s tasty – very tasty. Do I think it’s somehow ‘purer ‘ or nutritionally superior to a good whey, casein, pea, rice, or hemp protein powder? Nah. I just think it’s different. If you’re paleo-fexible you’ll like it. If you don’t ascribe to a paleo diet at all but just want to try a different powder, you’ll like it too. 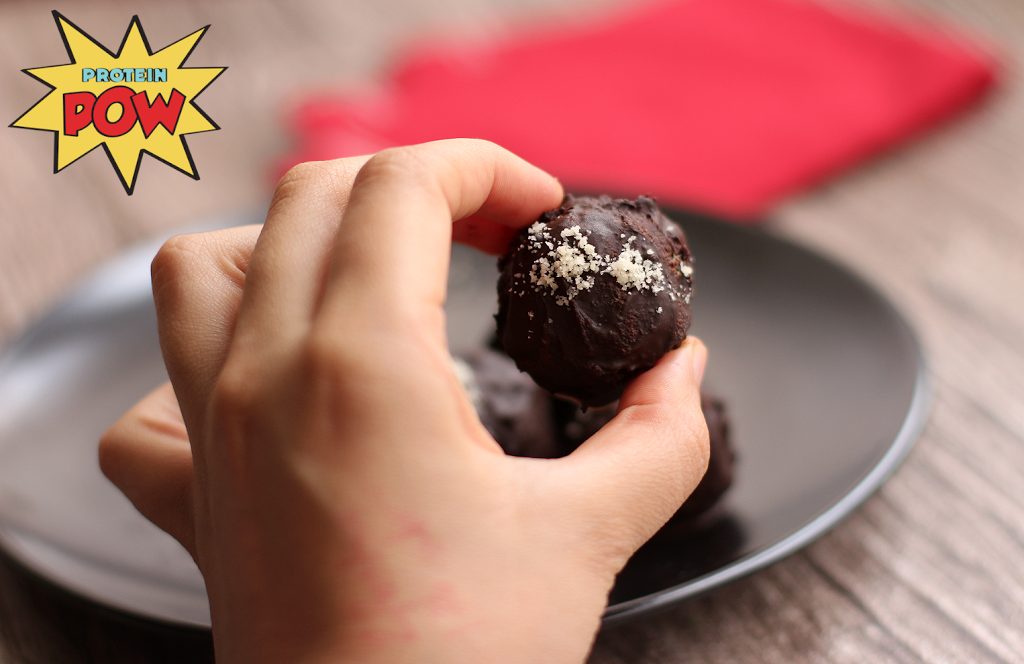 Either way, I recommend you give it a shot because, as an alternative source of protein powder, it ticks all the right boxes 😉 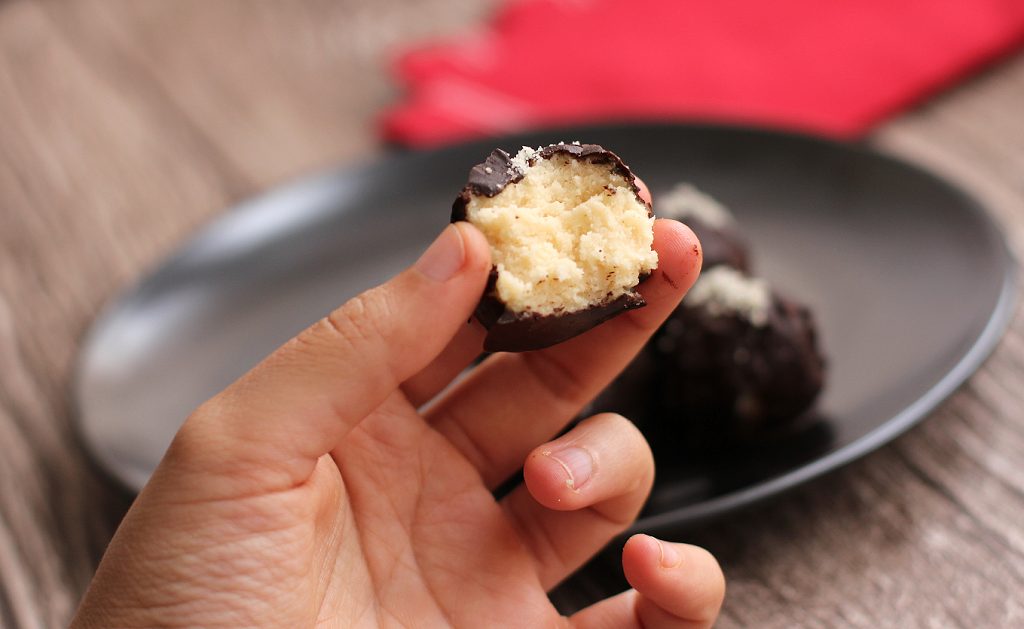 1. Get a bowl out and mix all of the above ingredients together (except for the chocolate) until you get a sort of malleable dough. You may have to play around with the mix a bit more if you’re subbing the paleo protein powder with another powder by adding more milk (to moisten it up) or coconut flour/almonds (to make it stick together). 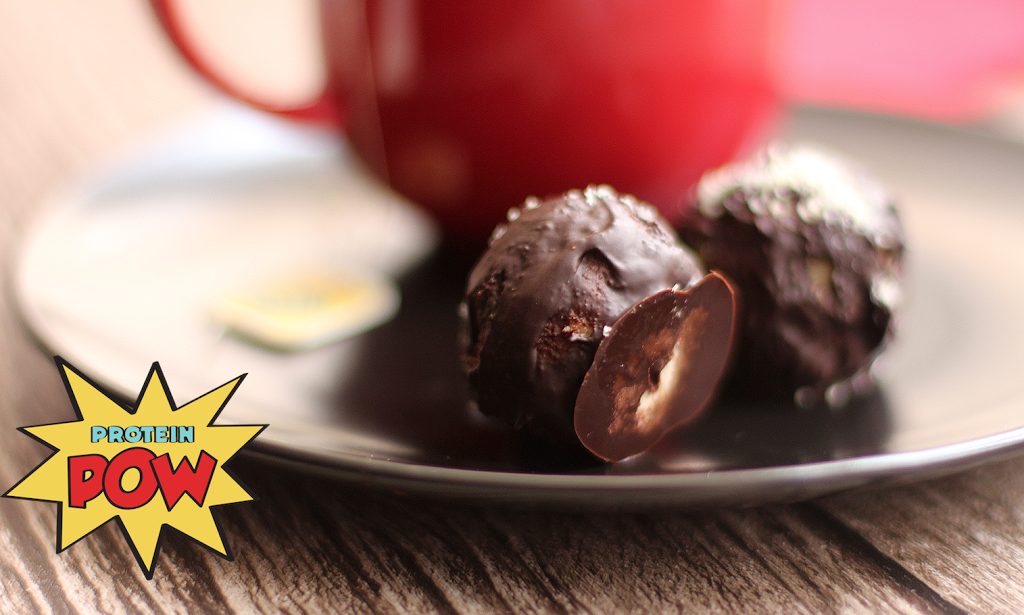 2. Once you get a dough consistency out of the mix, shape it into six ‘balls’.

3. Then, melt your dark chocolate in a bain marie (a glass bowl on top of a pot of boiling water) and dip the balls in there to coat them. Add a bit more ground almonds on top if you want, for added aesthetics. Finally, transfer to the fridge for an hour or the freezer for 30 minutes and ka-booom! They’re ready. 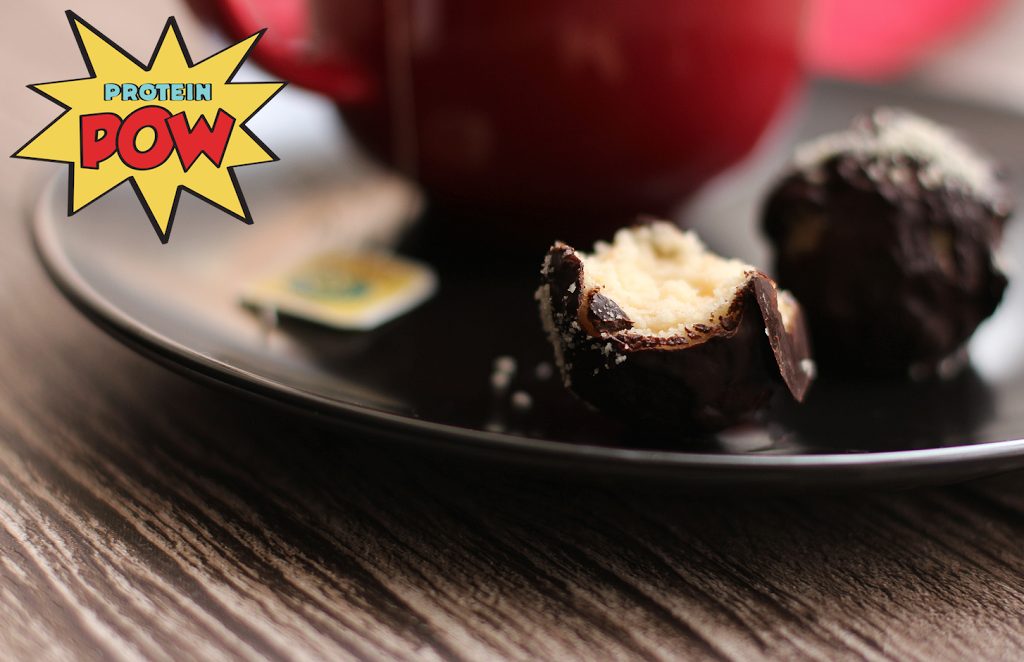