Speak to fitness enthusiasts around the world and it is a safe bet that at top of their supplement recommendations will be omega-3 polyunsaturated fatty acids. Ask why and you will be told that they are essential for weight loss and body composition however omega-3 benefits go far beyond that of a weight loss aid. By Liam Darville

When we are discussing omega-3’s it is generally the 2 essential fatty acids (FA) EPA (Eicosapentaenoic Acid) and DHA (Docosahexaenoic Acid) that we are talking about, although there is a 3rd FA – alpha-linolenic acid (ALA) it is EPA and DHA we are concerned with in this article. Why are they called essential? Simply because they must be present in the human diet as they cannot be created from other FA. Mainstream media has long heralded these 2 essential FA as a key component of fat loss and improved body composition. Whilst this has been evidenced within literature there is dispute suggesting that the effects are in fact relatively minor and have been exaggerated within popular media.

So should I stop with omega-3 supplementation?

The simple answer to that question is no. Whilst the effects are lesser than you might have been led to believe, omega-3 are still beneficial to fat loss and better body composition, numerous studies reporting a rise in lean body mass and a reduction in fat mass following supplementation. However, it is the multitude of benefits beyond this that are the real justification for omega-3’s and it is this that we delve into in the rest of the article.

Although there have been many studies performed investigating effects on weight loss relatively few studies have looked into performance responses. Work investigating strength and muscle adaptations as a result of omega-3 intake are still a minority and at present although some effects have been reported their benefits seem minor. Rather than drastically enhancing or reducing muscle protein synthesis (MPS) it appears that omega-3 instead alters the activity of the kinase enzymes AMPK and p70s6k (part of the mTOR pathway) potentially initiating MPS with lower leucine level than is generally believed necessary, further work is however required to validate this. Furthermore when investigating individuals who train regularly no significant difference was found in either muscle or strength gains in those who supplemented with omega-3 vs those consuming a placebo. The bottom line is that when it comes to muscle growth and strength adaptations there is at present little evidence to suggest that omega-3 will enhance changes.

Anybody who is active will recognise (and grimace at) the soreness that is associated with new or particularly intense exercise. Delayed onset muscle soreness (DOMS) generally occurs 24-72hours post exercise and is a result of inflammation within the muscle caused by the the damage incurred through exercise. Omega-3 FA are anti-inflammatory in nature; they are precursors to prostaglandins such as PGE2 powerful hormone like substances that can aid in the reduction of inflammation and increase blood flow. There is vast swathes of literature to support the anti-inflammatory properties of omega-3 and although it is by no means universal, there is a body of evidence to support the use of omega-3’s in the reduction of DOMS.

Recent studies have noted the positive relationship between omega-3 and brain health. Omega-3 polyunsaturated fatty acids (PUFAs) are essential for proper neuronal and brain function; they are a key component within the structure and thus function of the brain. Elevated levels improve the fluidity and viscosity of the membrane in turn enhancing neurotransmission, learning capacity and spatial awareness. Furthermore, they act to reduce both inflammation and oxidative stress within the brain resulting in improved brain health.

Omega-3 aids more efficient cognitive function, improved fine motor skills and an enhanced ability to perform complex brain functions. Needless to say this is of use to athletes across of all disciplines. Interestingly it seems that omega-3’s may also aid recovery from head traumas such as concussion. Believed to be due to DHA’s role in membrane structure, again this is an area requiring further investigation but has potentially huge implications given the rise of high profile concussion cases.

Much of recent research has investigated the possibility of omega-3 as a natural treatment for dementia. Unfortunately as of yet no cure is known for dementia, in particular Alzheimer’s and whilst there is no evidence supporting omega-3 intake with recession of the disease there is a growing body of research highlighting the protective and therefore preventative potential of elevated omega-3 intake earlier in life. Prevention is often better than cure and it would appear that increasing omega-3 intake in our youth may help to attenuate dementia risk.

Moreover as many diseases e.g. type 2 diabetes and many cancers, are inflammatory in nature the anti-inflammatory properties of omega-3 show great promise in helping to improve and alleviate many of these issues.

A relationship has also been proposed between omega-3 intake and respiratory function, in particular asthma. The area is still disputed with multiple studies both supporting and disputing the claims however it appears that omega-3 supplementation can aid in reducing asthma like symptoms. Summarised it could be said that omega-3 appears to offer support to respiratory function without (as yet) offering a cure.

But are there any side effects?

According to the US Food and Drug association intake should NOT exceed 3g.d. Side effects of doses above this include prolonged blood clotting time and so it is important to bear this in mind and keep intake below 3g.d.

As usual it is recommended to begin supplementation at lower levels and build up as and when required. High intakes straight off are likely to result in nausea thus recommendations would be to begin with a low intake of around 1g.d at a ratio of 2:1 EPA to DHA, this a fairly safe place to start.

Alternatively we should aim to consume 2-3 portions of oily fish daily as obtaining nutrients from ‘natural’ sources is generally thought more beneficial. If this is unrealistic or impossible then supplementation could be of real benefit

N.B. Recommendations based on healthy individuals with no underlying health issues.

·       Omega-3 may aid in the prevention of numerous diseases and illnesses.

·       Omega-3 research is a constantly evolving area and there is still much to be validated.

Our No.1 Omega 3 Supplement 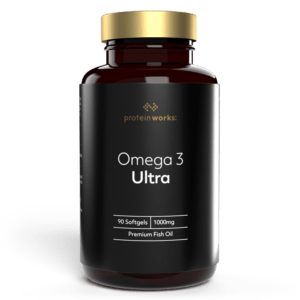