There is no worse feeling when exercising than getting injured. For once you’ve got the motivation, the opportunity, and you’re actually enjoying it, then BAM, you get injured. In this article, we will be looking at how to prevent running injuries, or at least to reduce the likelihood of them occurring.

What Injuries Are Most Common?

Running has a surprisingly high injury rate. A 2018 study found that novice runners had a 30% incidence rate of injuries per 1,000 hours. That’s slightly more than rugby (22.9%) and football (24.7%), two sports that are most often associated with injury.

There are a number of reasons for this. Which we will discuss in a bit. But what injuries are the most common among runners? That 2018 study we mentioned earlier looked at the most common injuries in runners and found that 30% of them were related to the knee, and 17% were the lower leg.

Often knee pain can be attributed to other parts of the leg. For example, IT Band Syndrome causes pain in the knee, but is actually a problem of the hip. IT Band Syndrome is one cause of ‘Runner’s Knee’ which is a general term for several causes of knee pain.

Runner’s Knee can be caused by:

Another very common injury is known as shin splints. This is where your shins hurt while running and/or afterwards. There may be a lot of inflammation around your shins during and after a run. This injury affects new runners most often, but there are a number of causes:

There are many other injuries that can affect you, stress fractures, pulled muscles, torn muscles, Achilles tendinopathy, then you’ve got injuries that can be caused by accidents (i.e. getting hit by a car, falling over, crashing into another runner). 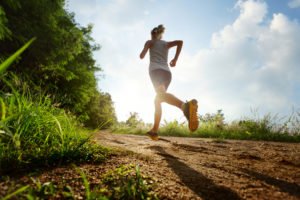 What Causes Most Running Injuries?

Most running injuries can be split into three main causes, we will look at each one in this section. The three causes are:

Earlier, we mentioned a study that had runners getting injured at a 30% rate, but this wasn’t the whole story. That statistic was for novice runners (amateurs). Professional and trained runners had a much lower incidence rate.

Which is strange if you think about it, because professional runners will be running at a faster speed, for longer distances, and at an intensity which is several times higher than a novice. The reason for this, is that professional runners know how to run. They have excellent technique.

Most people assume that running doesn’t require any coaching, it’s a sport where you just walk out your front door and start running. But actually, there are many ways to improve your technique so as to reduce injury risk.

Switching from heel striking to midfoot or front foot striking can lead to a big drop in injury risk, and it is something that can be learned through coaching.

This is just one example of how bad running technique can lead to injury. Your posture as you run, whether your knees point inwards or forwards, and many other details can increase your chances of injury but can be avoided through learning proper running technique.

Cause #2 Training too Hard for Your Body

This cause covers two different issues: 1) People training for too long at too high an intensity and their body breaking down (known as an overuse injury), and 2) People not strengthening their muscles through resistance training to cope with the stress.

The first issue is all about new runners doing too much too fast. Running before you can walk if you will pardon the expression. But it’s not just novices that can suffer from training too hard. Professionals often get injured when training for important races.

The second issue is down to muscle imbalances or a lack of strength/flexibility in certain muscles. This can be easily fixed by following a resistance training program.

Strengthening the hamstrings through deadlifts, strengthening the glutes and quads through squats, and improving core strength, will all help to reduce the risk of injury. Making your muscles stronger and more flexible helps make them more durable. You will also begin to run better. 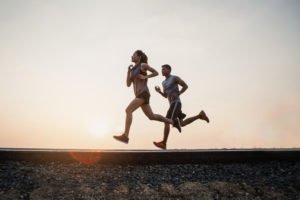 Tripping over a log, slipping in mud, crashing into another runner, accidentally running into a Police horse like Phoebe in Friends. This form of injury is less common than overuse injuries, but still happens at a high rate with running.

This is primarily because most running takes place in areas that are not specifically designed for running. Such as out on the street, or across country. Or in crowded parks. Whereas a basketball game (for example) will usually occur in an enclosed basketball court.

How to Prevent Running Injuries

There are several ways to reduce the risk of running injuries, but it is impossible to avoid them completely. If you run for 1,000 hours per year, for ten years you are statistically likely to become injured at least once.

But here are five ways to reduce your risk of injury:

Do all of this and you should not only lower your risk of injury, you should see huge improvements in your running performance and technique.