L-Theanine, an uncommon amino acid has been in the news a lot recently, thanks to its increased use in supplements and now beverages. There is a lot of buzz about its ability to improve relaxation and sleep quality, but could L-Theanine help improve your mental health? Or is it too soon to say?

L-Theanine is an amino acid. Amino acids are organic compounds, they can either be essential or non-essential. There are over 500 different amino acids that have been discovered, but only nine are essential to your health:

L-Theanine is a non-essential amino acid, meaning that you don’t need to consume it daily. Which is lucky because it is rarely found in our diet. The only source of L-Theanine in most people’s diets is in tea. 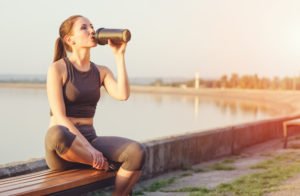 What Are the Benefits of L-Theanine?

In recent years, L-Theanine has become a popular supplement ingredient.

It has been used in a number of pre-workouts due to its supposed ability to work well with caffeine. The idea is that a supplement containing caffeine and L-Theanine will provide all the benefits of caffeine (increased power, reduced fatigue, cognition etc) without any of the side-effects.

L-Theanine can relax you without making you drowsy or tired. This is pretty rare, and it is a valuable benefit. Combining caffeine and L-Theanine can lead to an improvement in cognition and attention that is greater than caffeine alone.

Studies have shown that L-Theanine is also effective when taken on its own, helping to reduce anxiety, improve relaxation, improve attention, and even though it is non-drowsy it has also been shown to improve sleep quality (most likely due to improving relaxation and reducing anxiety).

As you can see, the most commonly cited benefits of L-Theanine are all linked to each other:

L-Theanine could well be the right supplement if you are dealing with a lot of stress and anxiety. It’s ability to work well with caffeine, and to even mitigate some of caffeine’s downsides has led to it being viewed as a nootropic, and there is something of a cult following in some areas of the web. 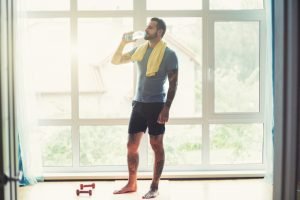 While the research into L-Theanine is in its infancy, there is good evidence (in animal studies) that L-Theanine is remarkably safe. Rats were given ridiculously high doses of L-Theanine and saw absolutely no toxicity (6,500mg/kg is an astronomical amount of L-Theanine).

Remember, it is found in tea, which is drunk the world over, and (particularly in British and Irish households) it is drunk very often.

Will Adding L-Theanine to Beverages Work?

As L-Theanine is found in the most commonly drunk beverage in the world the idea that it wouldn’t work in beverages is a bit strange. But there are several things that should be considered when assessing each L-Theanine enhanced beverage.

Is the Beverage Caffeinated?

When combined with caffeine, L-Theanine has been shown to significantly improve concentration and focus. When taken on its own, L-Theanine does not promote the same benefits, it encourages relaxation, reduces anxiety, and is calming in its nature. However, that calming aspect does mean that you may see a drop in focus and attention.

What is the Dosage?

L-Theanine appears to work best at dosages of 100mg – 200mg. A good L-Theanine beverage will contain a dosage within this range. One thing to watch out for would be under-dosing. This is where a company only adds a trace of the ingredient (say 10mg). That way they get to say that their beverage “contains L-Theanine” without having to spend money on the full dosage.

L-Theanine is not a particularly expensive ingredient, so this is perhaps unlikely, but certainly something to look out for when making a purchase. Of course, research on L-Theanine is in its infancy, it may turn out that very low doses are also beneficial. 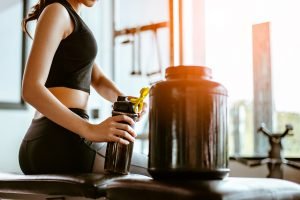 Does L-Theanine Negatively Interact With Other Ingredients?

Short answer, no. Long answer would be that L-Theanine does not appear to have any negative interactions with other ingredients, and may even work well with some. Caffeine is a great example of this, L-Theanine and caffeine have a synergistic relationship where they both enhance each other. It will be interesting to see whether other ingredients are found to interact well with it in the future.

L-Theanine is fine to be taken with alcohol, and there is even some evidence to suggest that it may help to mitigate some of alcohol’s effects on the liver. Could there be an alcohol and L-Theanine beverage on the market? Who knows!

Could L-Theanine Improve Your Mental Health?

L-Theanine could well help to reduce anxiety and mitigate stress. Due to its supposed ability to help with sleep problems, it could be said to improve your mental health. But it is only really able to treat the symptoms of poor mental health.

If you are constantly stressed or anxious, then seek advice from your doctor or therapist. Exercise, sleep, and supplementation can play a role in good mental health but talking to professionals plays a more important one.