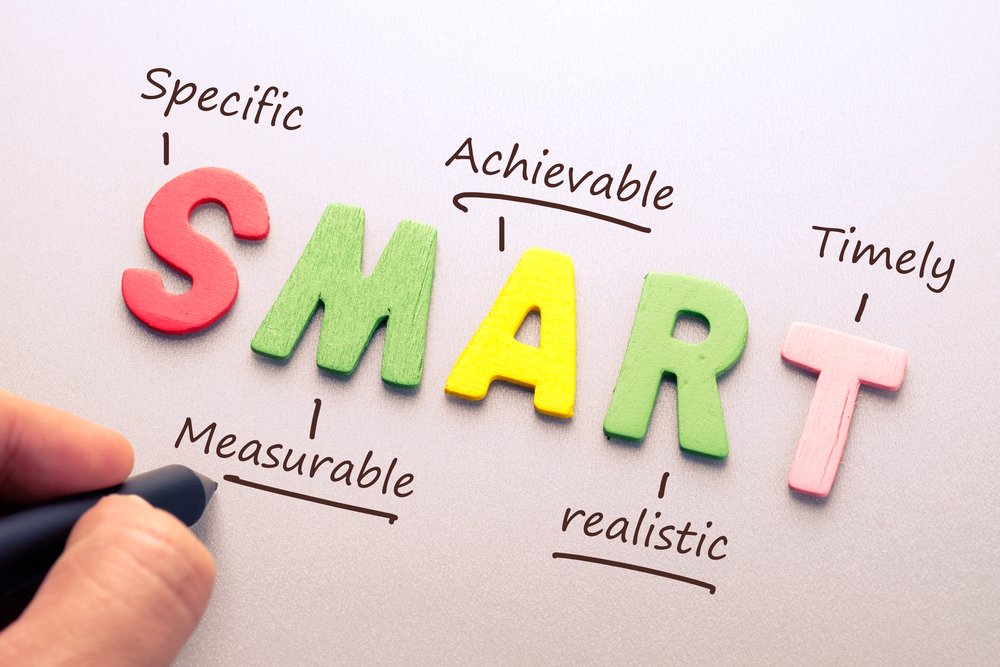 Each week starts off in the exact same way as the week before it. You wake up on Monday with either a fresh sense of enthusiasm for the week ahead or an almighty hangover (this really depends on how you celebrated the night before). Around midday you begin to look to the next few months and try to remember what your goals were going to be.

Most common thoughts involve dieting, going to the gym more, seeing friends and family more, or something similar. This is most telling for New Year Resolutions – and most resolutions don’t last longer than 30 days. Seriously, the chance that your goal will make it past the end of January is remarkably low. According to Forbes, only 25% of people are still committed to their goals after 30 days, and only 8% of resolutioners actually accomplish their goals [1].

Why is that? It is not because people are inherently lazy, nor are most resolutions unachievable. Mostly it is down to poor goal setting. It really is as simple as that!

A badly thought-out goal can actually lower motivation and reduce your chance of success. Often, the goal is too unlikely. If you decided to become a billionaire by Friday you would be unlikely to succeed, you probably wouldn’t even bother trying. But people set themselves impossible goals all the time.

Another common mistake is creating non-specific goals, such as “lose weight”. How much weight? In what timeframe? How will you go about measuring your weight loss? Without a specific goal, it can be hard to judge how well you’re doing.

In this article we are going to examine the five golden rules for successful goal setting. This will help you to effectively set yourself goals that you can actually achieve. Which will hopefully help boost that 8% success rate up a bit!

We will also have a bonus rule at the end, which may be very helpful to some of you.

You may have heard about SMART goals before, they were first brought to the public attention by George T. Doran in the 1981 issue of Management Review (surely you’ve kept a copy?). SMART is an acronym for:

Over the years, people have edited and revised these goals, so you may have heard of SMARTER instead or seen the letters stand for something different. But most people agree that Doran did it best, so we’re sticking to SMART.

The idea is that whenever you create a goal you check it against SMART to ensure that it is well thought out and practical. Let’s say you want to lose weight. If you wrote that down and compared it to SMART it would fail across the board.

Is your goal measurable? Well weight loss is measurable, but your goal isn’t. You haven’t said how much weight you want to lose, you haven’t measured your current weight, nor have you found a target weight.

Is your goal attainable? Okay, your goal is attainable. But only because you have failed to be specific. You could lose 0.01kg and technically would have achieved your goal. If your weight loss goal had been “lose 40kg in a week” then it would not have been attainable.

Is your goal relevant? Is there a bigger picture? If so, does this goal fit into it? If your long term goal was to live longer and be healthier then a weight-loss goal could very well be relevant.

Is your goal time-bound? Setting a date is very important for most goals, particularly if they are specific, measurable, and attainable. This will help increase motivation and will help you avoid certain pitfalls along the way (trying to do too much too soon for example).

If instead of “lose weight” your goal was “walk 10,000 steps per day for 100 days to help create a calorie deficit” your goal would be a lot more effective. It is specific, it is definitely measurable, it is attainable for many people (if not then you could lower the step goal), it is relevant to an overall goal of fat loss, and it is time-bound. You have 100 days.

SMART goals are a great way for many people to achieve their resolutions, but they don’t suit everyone. Check out our bonus rule at the end if you feel that SMART wouldn’t work for you.

Accountability is a very good tactic for ensuring that your goals are met. If you create a goal, tell nobody, and then fail, who is going to know? It’s not exactly high stakes! However, setting a goal that the entire world knows about? There’s a lot more motivation for you to succeed, of course there is also the risk that your fall from grace will be even more spectacular.

Accountability can be achieved in a number of ways, charity is always a good option. Many people complete the marathon each year partly because it would be too embarrassing to have to return money that their friends and family have donated.

Some people make a bet with friends, first person to go to the gym 50 times wins £50 or something similar. Though this type of accountability can be a bit of a minefield, particularly when it comes to a weight loss target – because everyone has different needs/abilities.

Creating a blog or video diary of your journey is another way to be accountable, but this one takes quite a lot of effort. It may even distract you from your actual goal! Sharing your goals with like-minded friends may be the best option. If your goal is gym-based then a gym-buddy can help keep you honest (ideally, find someone who already trains regularly. This way you know they’re more motivated than you to train).

Golden Rule #3 Plan for After you Succeed

Have you ever heard of the TV show “Biggest Loser”? It’s a show that gets very overweight people to compete against each other to see who can lose the most weight within a certain amount of time. You get to see some amazing results and it can be very inspiring. However, one thing that stands out is the fate of the contestants after the competition has ended. A large number of Biggest Loser contestants end up regaining the weight within a year.

This makes a lot of sense. During the competition, contestants had access to their own personal trainer, targeted nutrition, the support of their fellow contestants, and the motivation that an audience of millions would be watching them.

After the show is over, none of that is available to them. Sadly, this affects almost everyone who achieves their initial goal but doesn’t plan for the future. When creating a goal, you need to plan what you’re going to do once you’ve reached that goal. With fat-loss, you’d want to plan for a maintenance phase, where your calories in and calories out are the same. This will stop you regaining the lost weight, or losing more weight than you should.

Golden Rule #4 Write your Goals Down

If you have a short-term goal, then you need to create a long-term goal to prevent the issue outlined in Golden Rule #3. For example, if you are giving up alcohol for January, then you should create a longer-term goal to reduce your alcohol intake per week. Otherwise what is the point?

If you have a long-term goal (and most resolutions are long-term) then you need to break that goal up into smaller, bite-size portions. Weight loss is a great example, if you are looking to lose 10kg of fat, then you should have a short-term goal of getting all the junk food out of your house within a week. Then you could have another short-term goal of signing up to the gym.

Write these all down and tick each one off as you go along. You’ll get a sense of accomplishment each time you tick off an item, which will keep you motivated throughout.

For many people, following the five golden rules outlined above will really help them to achieve their goals. But everyone is different. Some people are incapable of creating/following effective goals. If you are one of these people, then all is not lost! Try this technique instead.

Rather than creating a goal, try to create a theme. Instead of saying you want to lose weight this year, why not say that this is a year for health? Then each month try and do something that will improve your health. If it doesn’t work, no worries! Try something else next month. Couldn’t walk 10,000 steps? Why not try increasing your protein? Or eating less crisps during your lunch break?

This may seem like we’re going back on everything we just said in this article, but that is not the case. If everyone was identical then goal setting would be easy. But there are many different people out there, and some goal setting techniques will work for them while others don’t. This last rule will work perfectly for people who struggle with organisation but nevertheless are committed to succeeding.